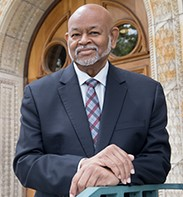 Bamidele Agbasegbe Demerson serves as the Chief Curator of the African American Museum and Library at Oakland (AAMLO)—a branch of the Oakland Public Library. Prior to affiliation with AAMLO, Demerson served in executive positions at the George Washington Carver Museum, Cultural and Genealogic Center in Austin, Texas; the International Civil Rights Center and Museum in Greensboro, North Carolina; and the Museum of African American Culture in Roanoke, Virginia. At the Charles H. Wright Museum of African American History in Detroit, Michigan he was the Director of Education, Research and Exhibitions.  A cultural anthropologist, Demerson received his undergraduate and graduate training at his alma mater, The University of Michigan in Ann Arbor. He also earned the M.A. degree in Museum Studies from Southern University at New Orleans. Demerson has taught at Washtenaw Community College in Ann Arbor, Michigan, and Southern University at New Orleans in Louisiana. Results of his anthropological fieldwork in Ghana and Nigeria in West Africa, and in Cuba, Brazil, and Southern United States in the African Diaspora have focused on kinship and comparative family studies, as well as visual art.  His research initiatives in anthropology and culture history have been presented at national and international conferences, as well as published in refereed journals, anthologies, and exhibition catalogs.